Welcome to the University of Buckingham!

What our students say

This is what one of our current students, Arun, has to say about his time so far at Buckingham:

I come from a quite busy and highly populated town in India and therefore I have been used to looking at life at a very high pace. I had developed a habit of watching the news when I was back home; it was interesting because I was learning how the country was developing and also how the economy worked as a whole. I realized there was a big world out there. I felt contained and ignorant. I believe the best way to learn the economy is to get in to the system right from the bottom and make my way up so I learn how it works at every level.

Coming to Buckingham has been very enlightening and I have learnt so much even though it is a very quiet town. I must say, though the town is quiet and beautiful, once you are in the university there is a lot of life going on. This helps the students to work in a very comfortable environment. Being able to intern in the marketing office has added to my benefits by a large degree when I reflect on my initial hopes of what the university would offer me. I strongly believe that every opportunity should be strongly held on to and appreciated.

In order to study at foundation level you will need to have undertaken 12 years of education and attained:

As proof of English language proficiency you would need one of the following:

In order to study at undergraduate level (Bachelor’s degree), you will normally need to have attained one of the following:

*Applicants for undergraduate Law programmes are normally expected to have achieved additional qualifications, such as a first degree.

In order to study at postgraduate level (Master’s degree), you will normally need to have attained:

Our alumni have gone on to have very successful careers in various industries, including: medicine and healthcare; legal services; banking; broadcasting, radio and television; information technology; manufacturing and allied industries and services; local government; education; international trade; consultancy; leisure and tourism; real estate and property; pharmaceuticals; accountancy; architecture, building and construction; biotechnology. This is what some of our alumni have gone on to do with their lives, and also what they have to say about their time at Buckingham:

I currently work for a small software company in London (City). We provide solutions to property/real estate sector. My current role is Implementation Manager.

My time at Buckingham has been very enjoyable. Before Buckingham, I studied at an international school, so being in an international group was important to me at the time. I found the small tutorial groups very useful. As part of my course, I had to do a year in Switzerland and it included work placement for about 4 months.

Although, like the rest of my classmates, I did not go on to work in the Hotel sector, I found a lot of what I learnt practically useful. Such as Corporate Law, Behavioural Science and Marketing Management.

I completed my schooling in India, followed by a Bachelor of Commerce (B.Com) in a regional university in my home town in India. I graduated in 1998 and began work as an intern with a small audit firm based in Chennai, India, for three years whilst pursuing my Chartered Accountancy course. During my internship period, I specialized in banking-based and corporate or financial-based audits. Later on, I had opportunity to work with Pentasoft Technologies Limited, Chennai, for a year as a software engineer in their international banking division. I completed a systems engineer course and got certified in the year 2002/2003. I got a job with Mascon Global – India for a brief period of 8 months or so, during which I had opportunity to deploy and support post-deployment customized software solution for a domestic retail banking client. I decided to enhance my skills and had opportunity to pursue a Postgraduate Diploma in Computing from the University of Buckingham for a year, graduating in 2005, and returning to Mascon Global Limited to work on various roles and responsibilities within software projects/products for international and internal clients. I also went on to qualify as a Certified Ethical Hacker (C|EH).

Traditionally most universities around the world follow certain norms/standards while tutoring students but they don’t care about each and every student’s interest or passion personally, but that’s not the case with the University of Buckingham; I experienced that they take special care and interest in every student from various cadres of life irrespective of different nationalities by breaking all the cultural barriers or boundaries during the course of study until successful completion through a personalised approach. I also felt that this university had offered me more encouragement at my times of hardship and inculcated deeper interests throughout my course of study. I feel that the fundamental purpose of pursuing education is to transform or reform the individual’s thought process and this transformation in turn has had a good effect both personally and in my professional front.

I studied the law programme LLB Hons and graduated in July 2003. My experience in university was fabulous and if I were to describe in a sentence I would say that along with the rich education with great faculty it gave me a new experience of life and world of opportunities with exposure.

I am a practising lawyer specializing in Income Tax laws. My permanent place of residence and work is Kolkata, West Bengal, India.

I graduated from the University of Buckingham with BSc (Hons) in Business Studies in the year 1997. Thereafter I went to USA and completed my MBA programme in marketing from Bentley College, Boston. Currently, I am working in Ajanta Pharma Limited, listed on stock exchanges in India, as Joint Managing Director of the company. I am also part of the promoter family which owns majority stake in Ajanta.

The University of Buckingham was a great educational experience for me in all respects. The faculty was simply brilliant. Studies were intensive and I feel that is what set it apart from all other universities in the UK. My learning at Buckingham prepared me well for pursuing an MBA programme later. Of course, the fact that it has such a huge international student population makes it easy for any foreign student to adjust quickly and also make some very good friends from across continents.

Pradeep studied Politics and History at Buckingham from 1990 to 1992, and went on to complete an MSc in Development Studies at the University of Bristol in 1994.

He has since worked with several international organisations, including the United Nations Development Programme, Save the Children (UK), AusAID, and the United Nations Relief and Works Agency, implementing various development programmes in India, Bhutan, Cambodia, Serbia, Jordan and Kyrgyzstan. He is currently working for Family Health International (a US-based international NGO) and in charge of implementing a major health programme for children affected by HIV/AIDS in India.

I studied Business Studies at the University between 1995 and 1996. Since then I have moved across various organizations, handled different profiles.

At Coffee Day Group, one of the largest F&B chains in India, I have played a pivotal role over ten years. I was the Head of Human Resources and later became the Business Head of one of its Group Companies. Presently I am Promoter & Director of Pasta Street India PVT LTD, which entails setting up a chain of restaurants, for which we have received funding from one of the most respected financial companies in the United Kingdom.

Whatever I have achieved in my professional and personal life, I owe it all to Buckingham. It picked up a young boy from Kolkata and introduced him to the world. It has been a life changing experience for me. No amount of thanks will be enough for my professors like Douglas, Mahesh and others and for my friends whom I met during my stint there. I remain eternally grateful to Buckingham, the town & the University to what it has done to my life.

After graduating with a BSc in Economics from Buckingham in 1992, I went to Warwick Business School and graduated with an MBA. Since then I helped set up Knight Frank, the property consultants in India and after working with them for 9 years, I joined an India dedicated private equity called New Vernon and have been running their real estate investments ever since.

I constantly remember and miss my two years at Buckingham. It was the perfect blend of education and fun. 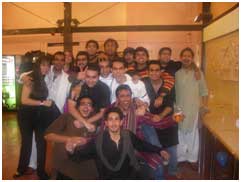 The University of Buckingham laid the foundation for me; it taught me not only about the academic side of life but the social side too. I have my entire future to thank for it. I had a great time in Buckingham.

I undertook MSc Service Management in Jan 2009 and graduated in March 2010. Since graduating from Buckingham I came back to India and started out my own venture in real-estate development here. Now I am starting my own tyre recycling plant, scheduled to be operational in first week of April 2012.

Buckingham to me means happy memories and great fun while gaining knowledge in a beautiful, small town.

We work closely with counsellors and overseas representatives who can advise you on how to apply for your degree as well as in completing your visa application.

You are not obliged to make an application through an agent but we strongly recommend that you consult with them if you require a visa counselling service. The International Office may be able to assist you with your application and let you know what documentation you need to prepare but are unable to offer advice on visas.

Representatives from the University of Buckingham travel to India three to four times a year, usually during March, May, September and November. See Overseas visits & interviews for more information.  Buckingham representatives will be in India on 4-13 May 2013.

If you wish to come and visit Buckingham campus and meet with an academic this can be arranged by the International Officer: