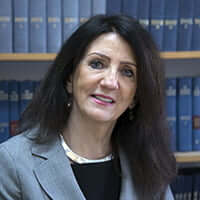 A barrister and a well-known writer and broadcaster on feminist issues, she currently lectures in Family Law, Sex, Gender and Minorities in the Legal Process, Criminology / Criminal Justice and Legal Skills and Procedure and tutors in Constitutional and Administrative Law. She is Co-Director of the Centre for Multi-Cultural Studies in Law.

Susan Edwards is a researcher and campaigner, with degrees in both law and social sciences, and a barrister. She has been actively involved in legal issues affecting women for many years, and writes, researches and campaigns in the area of Women’s International Human Rights. She has lectured across the world including USA, Middle East, Australia, and Europe. She is sole author of four books, a co-author of a further book, editor of a collection and editor for Borrie and Lowe, The Law of Contempt 4th edition ISBN/ISSN: 9781405736879 and has written several opinion pages on the law for The Times, The Guardian and The Age (Australia). See recently “Uncovering the truth: when and why judges ask defendants to show their face” May 18 2017

Published in February’s Criminal Law Review out now Issue 2 2022 ‘“Demasculinising” the Defences of Self-Defence, the “Householder” defence and Duress’ p 111-129.

Professor Edwards interviewed about her latest book ‘The Political Appropriation of the Muslim Body: Islamophobia, Counter Terrorism Law and Gender.  Listen to the podcast.

Instructed by defence and prosecution is several cases since 1991 on the effects of domestic violence in family and criminal proceedings.

and co-authored a report on their behalf with WHRIN: “Witchcraft Accusation and Persecution in Nepal”, Country Report Launched at National Women’s Commission in Kathmandu, Nepal, 2014 (read report)

Trustee – Management Committee of CAST – an organisation for education and training of female ex-offenders, 1992- 1996

Conducted research for Hammersmith and Fulham Council (1997- 1998).Edwards, S., Is change possible? An exploration of the applicability of Duluth principles of inter-agency coordination to the crime of domestic violence (1998)

Conducted research for Barnardos (1997-1998). Whose Daughter Next? Children abused through prostitution.

Member (some time) of the British Sociological Association

BBC Radio 4 contributor to Unreliable Evidence with Clive Anderson on reforming the law on violence, 7 September 2016; click here for the programme on BBC iPlayer

Battle of Ideas – 14th October 2018-“Consent classes: from school to parliament and beyond”

Battle of Ideas 2015 on “Rape Culture: Myth or Menace” click here to watch the debate

Video on “Islam and Feminism” 2015 for Maslaha https://www.maslaha.org/; click here to watch the video.

Visiting Fellow at the University of Maine, Portland, USA, spring 1996

(With others) Borrie and Lowe: The Law of Contempt Fourth edition (Part of the Butterworths Common Law Series) 2010 “Civil contempt”, ch.6, pp.123-253.ISBN/ISSN: 9781405736879 (The leading authority in its field, Borrie and Lowe is a comprehensive statement of the law relating to criminal and civil contempt of court.)
Read more about this article in our Publications Finder (18 October 2010)

Susan SM Edwards and Heather Douglas  “The Criminalisation of a Dangerous Form of Coercive Control: Non-Fatal Strangulation in England and Wales and Australia”  Journal of International and Comparative Law Vol 8 :1 June 2021 pp 87-120.

“Protecting children and vulnerable adults from witchcraft and spirit possession: related violence, victimisation and other harms”, International Family Law, Policy and Practice 4.3 (Winter 2016), 31-40.Read more in our Publication of the week section (7 August 2017)

(With Martin Downes) “Brides and martyrs: Protecting children from violent extremism”, Family Law (Sep 2015), 1073-1078.
Read more about this article in our Publication of the week section (12 October 2015)

“The self-incrimination privilege in care proceedings and the criminal trial and ‘shall not be admissible in evidence’ “, Journal of Criminal Law (2009) 73 JCL 48-68

“Disclosure: sacrificing the privilege of self-incrimination for the greater good of child protection?” Family Law 37 (2007), 510-516.

Check out “‘We do not consent to die’: Stop this sadistic ‘defence’ by misogynists with Susan Edwards (18 May 2020)” from British Sociological Association on Vimeo. The video is available for your viewing pleasure at https://vimeo.com/425940586

If you like this video, make sure you share it, too! Vimeo is filled with lots of amazing videos. See more at https://vimeo.com.