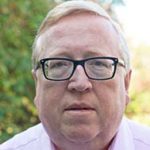 Simon Heffer was born in 1960 and educated at King Edward VI School, Chelmsford, and Corpus Christi College, Cambridge, where he read English. He pursued a career in journalism, becoming deputy editor of The Spectator and The Daily Telegraph. He still writes for the Daily and Sunday Telegraphs. He has written biographies of Thomas Carlyle and Ralph Vaughan Williams, and a political biography of King Edward VII. He was the authorised biographer of Enoch Powell, and Cambridge University awarded him a PhD in modern history for the book. Subsequent historical works include A Short History of Power (2010), High Minds – the Victorians and the Birth of Modern Britain (2013), and The Age of Decadence – Britain 1880 to 1914. His next book, Staring at God – Britain 1914 to 1919 – was published by Random House on 19 September 2019. He is currently editing the complete edition of the Diaries of Sir Henry ‘Chips’ Channon, to be published from March 2021. He has been a Professorial Research Fellow since 2017.