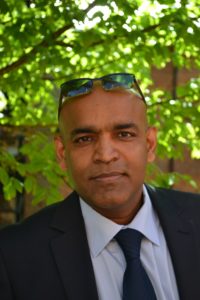 Reader in Trade and Maritime Law

Jae Sundaram is a Reader in Trade & Maritime law. A dual qualified ‘trade and maritime’ lawyer, Jae practised for several years before moving to academia. He holds a masters’ degree in maritime law and taught at the University of Plymouth before moving to Buckingham. Jae is the course coordinator for International Trade and Maritime Law, Law of World Trade, besides teaching on the module Financial Crime, Money Laundering and Mark Abuse, on the LLM programme. On the full-time and part-time LLB programmes, he is the course coordinator for the Commercial Law module, besides teaching Law of Torts, and Contract Law in the LLB Programme.

Jae’s research interests focus on the Maritime Law, International Trade, World Trade, Conflict of Laws, and public international law relating to the proportionality in the use of weaponry in modern conflicts. His monograph on Pharmaceutical Patent Protection and World Trade Law: The Unresolved Problems of Access to Medicines, published in 2018 is the culmination of over 5 years’ research into the problems faced in developing countries across the globe in accessing life-saving medicines, brought about by the introduction of extended pharmaceutical patent protection through the WTO.

Jae’s textbook on world trade law, WTO Law and Policy: A Political Economy Approach published in April 2022, is the first by a British author on the subject of world trade law, and also the first to be sole authored. His co-authored whitepaper, A Model Commonwealth Free Trade Agreement presented on 25 October 2022 in London can be accessed here.

Jae is currently co-authoring a textbook on private international law, which his due for publication in 2024. His publications can be found here.

His forth coming publications include a co-authored article entitled Impasse at the WTO Dispute Settlement Body: The Slow Demise of Multilateralism? an encyclopaedia entry, and a book review.

Interests outside of Academia

Jae is a fully qualified Tai Chi instructor, and an avid practitioner of traditional Yang Style Tai Chi, Qigong, and Hatha Yoga in his spare time.