Lecturer in History of Art 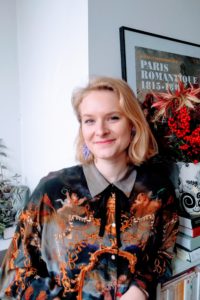 Lindsay Macnaughton is a cultural historian of France who has lectured and published on decorative arts and historic interiors, the history of collecting, and eighteenth- and nineteenth-century France. She is the course tutor for the French strand of the MA in Decorative Arts and Historic Interiors.

Born, raised, and schooled in Paris until university, Lindsay studied Modern Languages and Cultures (BA Hons French and Spanish) at the University of Durham before completing her MSt (Distinction) in French at the University of Oxford (European Enlightenment Programme).

Dr Macnaughton completed her PhD at the University of Durham in 2021, fully funded by the Arts and Humanities Research Council (AHRC), in collaboration with The Bowes Museum. Her Collaborative Doctoral Partnership focused on ‘Collecting and Staging French History in the Homes of John and Joséphine Bowes’.

As part of her PhD, Lindsay completed a curatorial placement at the Département des Objets d’Art, Musée du Louvre, in 2020. Previously, she was a curatorial intern at Waddesdon Manor (The Rothschild Collection), Buckinghamshire, and at The Wallace Collection, London, where she assisted Suzanne Higgott with research on Sir Richard and Lady Wallace.

Lindsay co-organised a conference on ‘Making a Case for Cases: The Furniture of Display’ at The Bowes Museum in 2020. In 2017, Lindsay Macnaughton co-curated an exhibition with Simon Spier on ‘John and Joséphine Bowes: Collecting the Far East in Nineteenth-Century Paris’ at the Garden Rooms at Tennants Auction House, Leyburn.

Lindsay MacNaughton, ‘Reviving former splendours: luxury and craftsmanship under Napoleon’, in Stammers, Tom (ed.), The Allure of Napoleon: Essays Inspired by the Collections of the Bowes Museum (Barnard Castle: The Bowes Museum, 2017), pp. 15-8.

‘Using Visual and Material Sources in Writing: Approaches for PG Researchers in the Arts and Humanities’, workshop organised for the Centre for Nineteenth-Century Studies, Palace Green Library, Durham, 8 March 2019