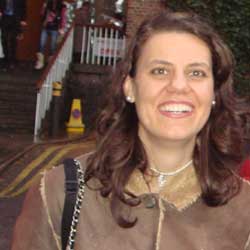 Valentina’s academic background is in International Relations and European Studies. Her research interests also include the Arab Gulf. Her PhD thesis critically examines the contribution of the European Commission to the construction and reconstruction of borders in the EU through four policy areas – the European Neighbourhood Policy, social policy, border controls and free movement of people. Valentina published an updated version of this study in a manuscript published in early 2017 in the Palgrave Studies in European Union Politics, entitled The European Commission and the Transformation of EU Borders.

Before taking up her Lectureship position at the University of Buckingham, Valentina worked at the University of Birmingham in several different teaching and research positions. Her research interests include (re)construction of EU borders, the European Commission, EU’s external relations with the Middle Eastern countries (especially Saudi Arabia), EU promotion of regionalism (with a focus on the Arab Gulf). Her work has been published in various academic outlets – peer-reviewed journals, edited volumes, think-tank papers.

Valentina is a member of UACES and EISA, and an Associate of the Higher Education Academy.

Valentina would consider PhD supervision of theses focused on EU politics, EU’s relations with the Middle East, and the Arab Gulf.

“The European Commission and the Configuration of Internal EU Borders: Direct and Indirect Contribution”, Journal of Common Market Studies, 51.2 (2013), 264-280.

“What is the Status of the EU-GCC Relationship?”.  Paper presented at Promoting an EU-GCC Dialogue on Foreign Policy Issues, organised by Qatar University’s Gulf Research Centre and the Institute for European Studies at Vrije Universiteit Brussels, 29-30 April 2013.  Full text available.

“Neo-functionalism, the Commission and the construction of the EU’s external borders”, in Klaus Bachmann and Elżbieta Stadtmüller (eds), The EU’s Shifting Borders: Theoretical Approaches and Policy Implications in the New Neighbourhood (London: Routledge, 2012), 28-42. ISBN: 978-0-415-61609-6.

“The European Union’s internal discourse on democracy promotion in the Middle East”, Report on the Proceedings of the ESRC Project Palestine Workshop (2010), download report here.