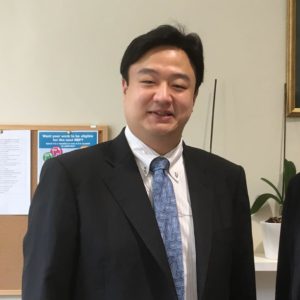 Dr Tobisawa’s research fields are disarmament, global governance, diplomacy and international law. His fieldwork in nuclear disarmament has involved research in several countries and areas including the UK, Japan, the United States, Switzerland and Austria. To explore global and local structures of nuclear disarmament, he has been interviewing senior members of leading civil society organisations and governmental sections.

In 2018, he published his book entitled Influence of Civil Society on Japanese Nuclear Policy on the private diplomacy of civil society organisations, which are based in Japan. This has now been published for the University of Buckingham Press.

Dr Tobisawa has also been working actively on UK-Japan educational exchange programs. He is the founder, and was the first Chairman of Board of Directors and Representative Director (2014-2015), the Margaret Thatcher Japan Foundation, in Tokyo. In terms of his legal practice and business expertise, he is now the Group Manager of Legal & Intellectual Property Group, Manager of Human Resources & General Affairs Group and Yamaha Motor Robotics Holdings, which has the biggest market share of semiconductor-making equipment (post-process) in Japan.

Dr Tobisawa has a BA, MA, LLM and DPhil from the University of Buckingham. Within the University, he has been working as a Research Fellow & External Relations Officer of the Centre for Global Studies and the Advisor to the Vice-Chancellor on Japan Initiatives. He is also Co-Convenor, UK-Japan IT Conference for Emerging Technologies (2020-present) and writing a book of laws in cybersecurity, privacy and data protection.