Senior Lecturer in Economics / Director of the Vinson Centre 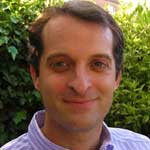 Doctor of Economics since 2003 (UAM University at Madrid), Juan Castañeda has experience working and researching in monetary policy and central banking. He has worked with the European Parliament’s Committee of Economic and Monetary Affairs in the so-called “monetary dialogue with the European Central Bank”, and has also submitted written evidence for a UK Parliament report on the euro. He has been a visiting researcher at Cass Business School in London (and from 2015 to 2018 senior visiting fellow of the Faculty of Finance), and lecturer at UNED University in Madrid. He has been awarded a Bank of Spain annual scholarship to develop research on the monetary history and has also developed several research projects funded by the Institute of Fiscal Studies at Madrid on fiscal policy rules. He is the review editor of Economic Affairs and the editor and author of a website specialising in monetary policy and central banking: http://theoldladyofthreadneedlestreet.wordpress.com Juan is also a member of the Institute of Economic Affairs’ Shadow Monetary Policy Committee, since September 2018.

Juan Castañeda was appointed as Director of the Institute of International Monetary Research in January 2016.

In 2017 he was appointed as “External Expert” in Economics of COST, the European Cooperation in Science and Technology Agency. COST is supported by the EU Framework Programme Horizon 2020.

Dr Castañeda is the co-author of a quarterly column (Money Matters) in OMFIF’s Bulletin (with Tim Congdon) and has been quoted in S&P Global Market Intelligence on topical issues in money, banking and central banking; such as the ‘LIBOR scandal’ (https://mv-pt.org/the-libor-allegations-could-affect-the-bank-of-englands-credibility/) , central bank independence (https://www.spglobal.com/marketintelligence/en/news-insights/latest-news-headlines/50037594)  or new digital currencies (https://www.spglobal.com/marketintelligence/en/news-insights/latest-news-headlines/facebook-s-libra-move-sparks-controversy-in-italy-amid-parallel-currency-row ). He has also contributed to CityAM with articles on the Eurozone (https://www.cityam.com/eurozones-push-unified-fiscal-discipline-doomed-fail/) and financial regulation (https://theoldladyofthreadneedlestreet.wordpress.com/2017/10/30/tighter-bank-regulation-wont-stop-boom-and-bust-but-it-will-damage-growth-and-prosperity/) .