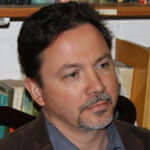 John Drew joined the Department as a lecturer in 1998, after a period of teaching as a Visiting Lecturer in the northern Spanish University of León. He was promoted to a personal chair in 2011 and became Dean of Arts and Languages in 2014, followed by Dean of Humanities (2015-2018). He is currently Head of the English and Digital Media Department, Humanities Research Officer, and Deputy Chair of the REF21 Steering  Group.

Professor Drew has taught widely across all levels of the undergraduate programme; he is currently responsible for the 1st-year modules ‘Eras of English’ and ‘Literary Journalism, 1642-present’, and 2nd-year courses in ‘Restoration & Augustan Literature’, contributing also to ‘Fiction and Theory’, ‘Renaissance Literature’ and Foundation courses in English Language.

These include 19th-century print culture, the Victorian miscellany, and in particular the journalistic work of Dickens and his contemporaries. Professor Drew directs the international research project Dickens Journals Online, which is centred around open access digital editions of two mid-century periodicals, Household Words and All the Year Round.