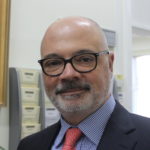 
Adolfo is a  professor in Corporate and Insurance  Law. His area of research and interest also includes Fintech and  Artificial Intelligence. He is the co-author of  Directors’ and Officers’ Liability Insurance the winner of the British Insurance Law Association Insurance Book Prize in 2009.

Professor Paolini holds the position of Insurance Law Consultant to the International law firm Clyde & Co LLP with presence in more than 40 jurisdictions worldwide.   Professor Paolini’s consultancy, as a member of international dispute resolution of the firm, includes advising on directors’ and officers’ liability insurance, international insurance disputes and providing guidance as to the operation of the Latin American insurance market. He is also the vice chairman of the civil liability insurance working party in the International Insurance Law Association (AIDA).

Professor Paolini has been ranked twice, as a notable practitioner and foreign expert in Banking and Finance by one of the world’s leading guides to the legal profession. Chambers and Partners.