David Jacques, Senior Research Fellow in Archaeology at The University of Buckingham’s Humanities Research Institute, has directed excavations at Vespasian’s Camp, Amesbury, Wiltshire, since 2005. The work has resulted in the discovery of a site, situated just over a mile from Stonehenge, which has been described as “the most important discovery at Stonehenge in many years” by Professor Timothy Darvill, who is writing the Stonehenge Research Framework for English Heritage. The discovery of the place where the communities who built the first monuments at Stonehenge lived is the stand-out result, but the fact that the site also provides evidence for ritual activity in later periods suggests that a rare “multi-phase” site has been discovered. 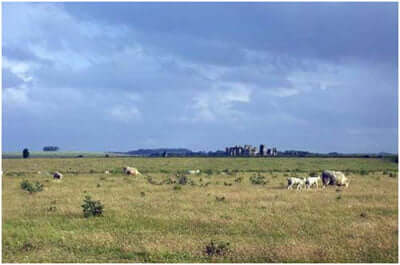 Stonehenge: Vespasian’s Camp is to the left of the monument, facing the tree clump

On 1 May 2012 Her Majesty the Queen was presented with a selection of tools found at the site during her visit to Salisbury. 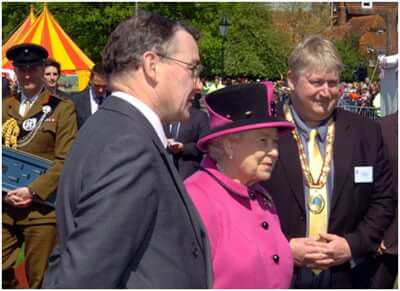 Contexts to the discoveries

Simply because of its geographical location Vespasian’s Camp might have been expected to have had some cultural and phenomenological significance in the prehistoric and early historical periods (see OS map below). The hill on which it stands rises to around 95 metres above sea level and, through its history, it would have had excellent intervisibility with important prehistoric and historic monuments and sites to all points of the compass in the Stonehenge landscape. It also commanded extensive views of the River Avon. But until the team’s small-scale excavations the place had received very little academic attention. Why? 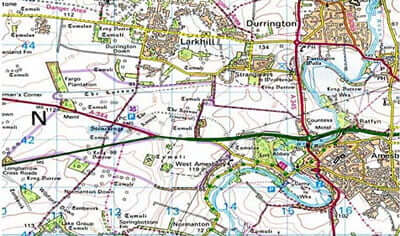 Despite being a scheduled monument on account of its being an Iron Age hill fort, Vespasian’s Camp’s archaeological potential only began to be fully revealed between 1999-2005 as a result of David Jacques’s detailed research of the site’s estate and nearby farm records. This revealed that widespread assumptions about the extent of Charles Bridgman’s 18th-century landscaping of the Camp and surrounding area, which had led to similarly widespread assumptions of the site’s earlier archaeology being largely destroyed, had been wrong. The fact that the site has been in private hands since Tudor times, and that successive landowners have been understandably keen to safeguard the tranquillity and beauty of the place, also helped to create and reinforce the conditions where Vespasian’s Camp became an archaeological blind spot.

Our field work started in 2005 after Sir Edward and Lady Antrobus, the site’s owners, kindly agreed to a meeting on site between their Site Custodian Mike Clarke and David Jacques. Mike is an especially key player in this story because, having worked on Vespasian’s Camp for over 30 years, he understands its flora, fauna and landscape features expertly. After whittling six possible targets down to one, he agreed to allow a small team of 20 to test-pit and survey an area north east of the Camp, which lies outside the Scheduled Monument, known as Blick Mead.

This work went on over a long weekend in the autumn of 2005, and the results pointed to this place having real archaeological potential. The team has been invited back to dig there, and to survey other areas of the Camp, every year since. 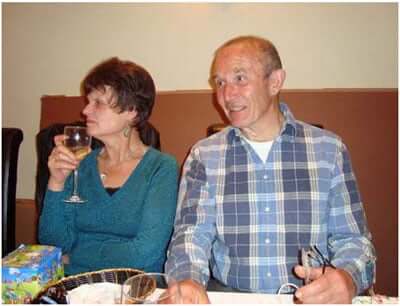 Mike and Gilly Clarke, the Custodians of Vespasian’s Camp, at one of our Saturday night curries at Tandoori Nights in Amesbury

The examination of the property deeds and the estate records of this area had in fact revealed that it hadn’t been part of Charles Bridgman’s 18th century landscaping plans at all. Indeed the water feature at Blick Mead, hitherto assumed to have been an 18th century pond, was identified by our geologist, Dr Peter Hoare, as an ancient spring, and the largest of a complex of springs in the immediate area. Springs have potential for excellent preservation conditions, and with this one’s close proximity to other archaeological sites and the River Avon, as well the fact that springs are increasingly being regarded as “special places” in the early landscape, it was clearly the best target for a close investigation. 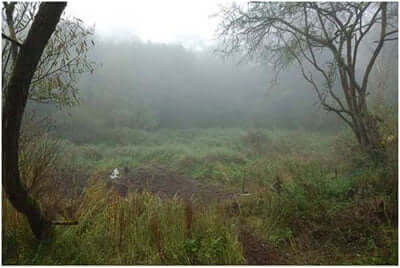 Read about the discoveries