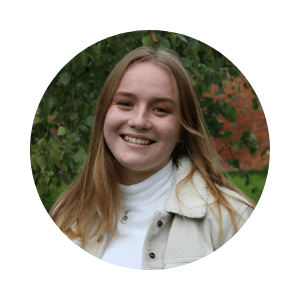 Celia is our Buckingham Sports Union President, and her role is to represent the interests of the BSU, and its clubs, within the Students’ Union Executive. As a whole, the BSU actively engages with both students and staff to build active participation in sport at the University. Celia helps aid in the development and support of all sports clubs, and also organises social sport events throughout the year, such as the Chancellors Cup and the Sports Awards.

I started at the University of Buckingham in January 2019, studying BSc Accounting and Finance. When I left school in 2017, I originally went straight into full-time work, not thinking I would go to University, but it was through my work that I decided I wanted to study Finance further.

Having grown up locally and going to school here, I stayed home with my parents. This meant I put a lot of effort into getting involved in societies to make sure I could make the most of my time at Buckingham. I joined the Cheerleading society and am now also club Secretary. Now I’m moving into my second year, I have made the decision to move into Buckingham so that I can spend more time on campus and make the most of my final year here.

What I’m working on