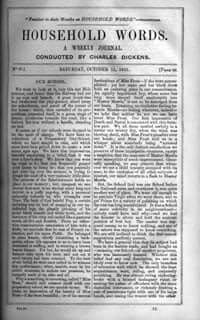 The project is called Dickens Journals Online (DJO). Its aim is to digitise and make freely available, as an educational and literary resource of unusually broad appeal, the two weekly magazines edited by Charles Dickens throughout the 1850s and 1860s. They are a treasure trove of good writing by over 300 authors; Dickens himself published A Tale of Two Cities, Hard Times and Great Expectations in their pages, as well as over 200 articles.

The motive goes well beyond pure conservation. It’s not just that the originals are rare and decaying – a fully searchable facsimile online edition, with commentary, notes, and bespoke educational resources for schools, universities and the general public, will bring the material alive in a myriad of new, relevant, and stimulating ways.

DJO was fully operational by 7 February 2012, the bicentennial anniversary of Dickens’s birth. It will both build on and extend his reputation internationally. It is a project with a natural base at the University of Buckingham and a clear regional home in the South East. Although Dickens is often represented as a writer inspired primarily by London and the city, anyone familiar with his life and work knows that his creative interaction with the geography, topography and people of the South East is absolutely fundamental.

The key concept behind DJO is the alliance of traditional scholarship with 3 key modern technologies:

Each of these technologies has made rapid advances in recent years, enabling DJO to take advantage of hard-won experience from earlier projects, and of general cost reductions and time-saving new software. In addition, there is an increased uptake of and reliance on online digital resources in these 3 areas:

The DJO core team, together with its many supporters, and partners in the South East, constitutes an assembly of people fully capacitated and motivated to make it succeed. An Editorial Advisory Board, spread across four continents, will offer a high level of advice and scrutiny, and its members will act as international ambassadors for DJO once it goes live. Co-ordinating their input would have been impossible only 10 years back, but email makes the job straightforward and swift.

About £10,000 has been raised in the last year, but equally importantly, a collaborative agreement with the California-based “Internet Archive” project (www.archive.org) has provided us with nearly £100,000 of high-quality image and text-digitisation, for a minimal outlay. We are currently creating a fully valid Prototype of DJO to go live in late Summer 2008, for which £7,500 is still required. A further £240K over five years allows the much larger main project to be completed on schedule. But if we continue to be successful in creating collaborations and partnerships, we are confident this figure can be significantly reduced, with no compromise to our vision.

Cautiously-estimated revenue opportunities allow DJO to start recouping its costs from 2007 onwards, while at the same time ensuring long-term sustainability by paying for site maintenance and a permanent curator. From 2010, annual revenues in excess of £40,000 seem probable.