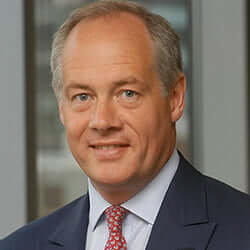 Rory was Chief Executive of Coutts from 2010-2015 and is currently Chairman of Sanctum Wealth Management, India and Chairman of British Ski and Snowboard. He was previously Deputy Chairman of Council, Hon. Treasurer and Chair of the Finance Committee at King’s College, London. He served on the Council of King’s College from 2007 until 2016.

He was appointed Chair of Council at the University of Buckingham in June 2017.